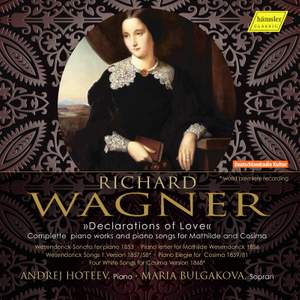 "Happiness triumphs once every 5,000 years." - Richard Wagner to Cosima, shortly before his death. For a fleeting moment at the end of his life, Richard Wagner experienced the deep happiness he had been seeking. The last words he wrote in his treatise On the Feminine in Human Nature, on February 13 1883, were love tragedy. Although it is usually far too simplistic to interpret works of art purely in the context of biographical information, several of Wagners compositions (especially some of the smaller works) really do have a diary-like nature. One such work is the Siegfried Idyll, a symphonic overture from 1870 that Wagner wrote for his wife Cosima to mark the birth of their eldest son. Another is the song cycle Wesendonck Lieder (especially its first edition), which Wagner wrote in stages over 1857 and 1858. Less well known are the Sonate für das Album von Frau M.W. (Mathilde Wesendonck) from 1853 and a musical letter (Notenbrief) to Mathilde, dated December 19 1856 and entitled Sleepless.