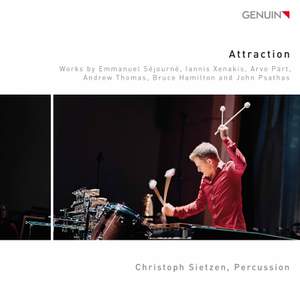 Merlin: I. Beyond the Faint Edge of the World

Psathas: One Study One Summary

One Study One Summary: I. Etude

One Study One Summary: II. Summary

We challenge anyone to listen to five minutes of Christoph Sietzen's new Genuin release without twitching their toes, tapping along with their fingers, and being seized with the irresistible urge to get up and start dancing. The prizewinner of the 2014 ARD Music Competition takes us on a trip through the percussion worlds of the late 20th an dearly 21st centuries that 70s groupies would have taken large quantities of drugs in order to emulate. Sietzen dazzles us with his sheer precision, seemingly endless range of tonal colors, and musical drive. From Arvo Part to Iannis Xenakis, from Emmanuel Sejourne to Bruce Hamilton - expanded consciousness guaranteed!