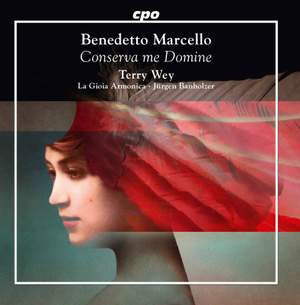 Once an insider’s tip, it is now as an international star that the countertenor Terry Wey presents sacred music from eighteenth-century Italy on the album Conserva me Domine. The composer Benedetto Marcello, a Venetian nobleman who studied composition with Gasparini and Lotti and then went on to distinguish himself both as a composer and a poet, forms the special focus. Marcello’s contemporaries praised the appealing and original melodic design of his psalms and particularly emphasized the skill with which he enriched musical expression with surprising and unusual harmonic modulations. Moreover, he was the first Christian composer to elaborate Jewish melodies in his works. Our chosen ensemble, La Gioia Armonica, was founded by Margit Übellacker and Jürgen Banholzer and is particularly fond of exploring the Baroque repertoire for the "salterio." This member of the zither family so very popular in Italy during the eighteenth century is heard on most of the works on this album.