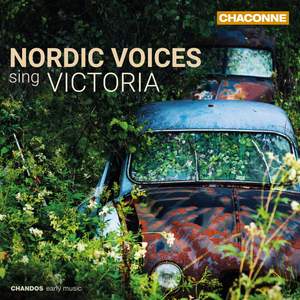 The Norwegian six-member a cappella group, Nordic Voices here presents the extraordinary polyphonic music of Tomas Luis de Victoria, a Spanish composer whose music has continued to move people for more than 400 years, crossing geographical, cultural, and even religious barriers. This surround-sound recording comes ten years after a "warm, consistent and moving" (BBC Music) album of Lamentations, which featured pieces by sixteenth-century composers, including Four Lessons by Victoria. Examples of the composer's exceptional output, characterized by a careful setting of the text and an ability to control texture by a constant grouping and regrouping of different voices, here meet the artistic resourcefulness, versatility, technical precision, and freshness of the young ensemble.

This is perhaps Nordic Voices’ most satisfying recording to date…their very bright sound lends itself …readily to the selection of music on this new offering, which showcases Victoria at his most joyous. …the performances are as legible as one could wish.

Nordic Voices’ approach is equally unfussy, while being deeply expressive and sensitive to Victoria’s many subtleties… there will always be room on my shelf for Nordic Voices.