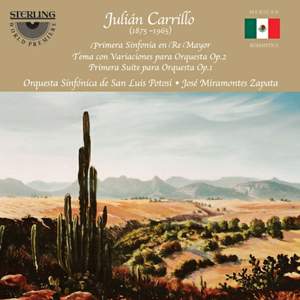 This extraordinary musician was born in the village of Ahualulco, San Luís Potosí, on January 28, 1875, the same year as Ravel, Melartin, Gliere and Max d’Ollone. He began his formal studies at the age of ten in the State Capital and later moved to Mexico City to continue his education in the National Conservatoire (Conservatorio Nacional de Música).

In 1899 the Mexican government awarded a grant to the young musician, then aged 24, to continue his studies in Europe. In Leipzig he entered the Royal Conservatoire where he studied composition with Salomon Jadassohn, violin with Hans Becker and theory with Carl Reinecke, who also taught another great Mexican composer: Ricardo Castro.

The San Luis Potosí Symphony Orchestra achieved great renown in the international perspective under José Miramontes Zapata’s direction. The orchestra has been invited to important events such as the 2003 and 2005 Festival Internazionale della Associazione Mondiale Toscanini, to the Ravello Festival in 2005, both in Italy, and to the 2005 Musicalta Festival in Alsace, France. That same year, the San Luis Potosí Orchestra became the first Latin American Orchestra to perform at the Grosser Musikvereinssaal in Vienna, Austria, under the direction of José Miramontes Zapata, who became the first Mexican conductor to perform at Vienna’s Great Hall, one of the leading concert halls worldwide.