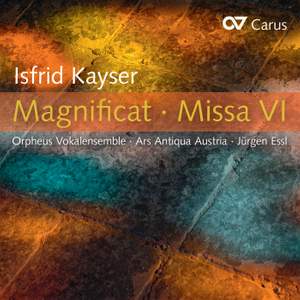 Parthia No. 1: I. Concerto. Allegro

Isfrid Kayser (1712–1771) spent almost his entire life in the Premonstratensian Abbey Marchtal, where he soon gained a reputation as an especially versatile musician. Numerous spiritual organizations commissioned church music or sacred music dramas. As a play of words on his surname (Kaiser = emperor), his confreres soon called him the “Caesar of Music.” His Magnificat and the Missa VI are presented here in a recording together with several smaller works; they document Kayser’s extraordinary accomplishments. These majestically sacred works is interpreted by the Orpheus Vokalensemble and Ars Antiqua Austria under the direction of Jürgen Essl.