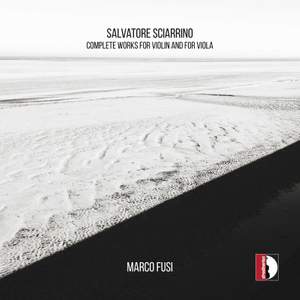 Among the indisputable achievements of contemporary music is the idea of the static contemplation of sound, slowly forming over time inside those who internally imagine and focus upon it in order to subsequently create and manifest it though a physical act. It's the wondrous path undertaken by those who express the dimension of sound as thought (even before it becomes symbol), and distill it within themselves until sound can be detached from its imaginer. Salvatore Sciarrino utilized this idea of contemplation of sound freely in his compositions, as this album containing his complete works for violin and viola shows. Performing these works is Marco Fusi. Violinist and Violist Marco Fusi is no stranger to contemporary music. He has collaborated with contemporary ensembles all across the world, and has premiered many new works.