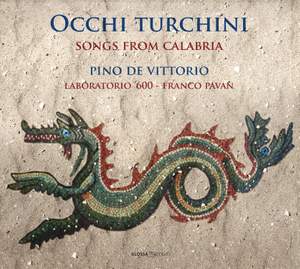 Franco Pavan’s recent forays into the exciting world of folk/early music with Laboratorio ’600 are stylish and exciting. His combination of poignant programming with crisp, exacting performances... — Gramophone Magazine, September 2017 More…

With Occhi Turchini inspiring singer, instrumentalist and actor Pino De Vittorio has returned to the recording studio, fixing his sights on the musical culture of the Italian region of Calabria. For a new recording for Glossa, Franco Pavan and his Laboratorio ’600 have been researching back over the centuries the rich musical texture of the region, known as the “toe” of the Italian “boot”. Most recently, singer and ensemble worked together for the Siciliane recording, also for the Spanish label. This new programme embraces traditional songs, examples of the adulteration of the local language for comic effect in Baroque Neapolitan opera, and even a parody of the text for the Te Deum in the same Calabrian, but also reflections of other – Byzantine, Greek, Albanian and Arabic – cultures which have permeated the region over the centuries. Pino De Vittorio – that versatile powerhouse of mood – is the ideal vocal interpreter for this multi- layered chequerboard of the region’s cultural history, with Pavan and his ensemble imparting colourful accompaniment for De Vittorio or spirited soloistic playing in instrumental works such as the Tarantella ’nfuocata, La calabrisella, and especially the Canzona a morto, played on the harp by Flora Papadopoulos. Pavan, as well as playing theorbo and the Calabrian chitarra batente, also acts – through his booklet essay – as guide across this rugged, isolated, but immensely rich cultural terrain.

Franco Pavan’s recent forays into the exciting world of folk/early music with Laboratorio ’600 are stylish and exciting. His combination of poignant programming with crisp, exacting performances shows that he has a finger right on the pulse of current trends in musicology. This latest album, ‘Occhi turchini’, brings the ultra-expressive and colourful voice of Pino de Vittorio together with some fascinating research into various cultural influences on southern Italian music; the result is a selection of traditional Calabrian songs and instrumental works full of surprises … this disc is so much more than a revival, it is a celebration of Calabrian diversity and history.

It’s all done with the lightest of touches and the stylish result is a fascinating musical amalgam...De Vittorio is a superb guide to all of this, bringing perfect diction and just the right amount of actorly guile to his singing, without ever overdoing it, while the playing of Pavan’s ensemble...bristles with energy.