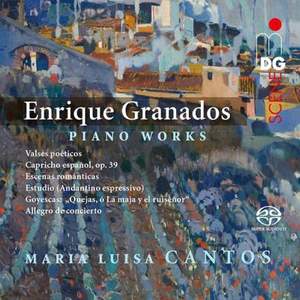 A little over a hundred years have passed since Enrique Granados met his death in the English Channel. After an acclaimed concert tour that took him to New York at the height of World War I, a German submarine sank the ship on which he was returning to Europe.

Many manuscripts by the famous pianist were also lost in the icy waters and must have included priceless treasures – as we may gather from the interpretations of his surviving works by Maria Luisa Cantos, the grande dame of Spanish piano music, on her latest recording. After Granados had initially been brought to safety, he plunged into the water to save his beloved wife and lost his life in the effort – lending a romantic element to this extremely tragic episode.

With genuine mastery Maria Luisa Cantos probes the deep feeling of this music with which she has spent most of her life. Without false sentimentality she honors the composer on the occasion of the 150th anniversary of his birth on this sumptuously recorded, multichannel SACD in 2+2+2 sound.