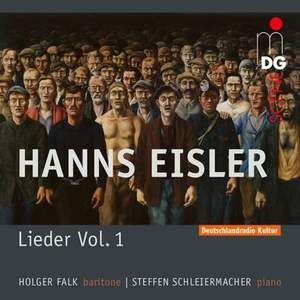 All the songs receive terrific performances. Holger Falk has a clear, cleanly focused baritone that can run the gamut from a honeyed piano to something more like an impassioned shout...There’s... — Gramophone Magazine, August 2017 More…

Between the Great Depression and the Third Reich the committed communist endeavoured to exercise influence with his music as his medium. On the first volume of MDG's edition of Hanns Eisler’s songs, Holger Falk and Steffen Schleiermacher present pieces from the years between 1929 and 1937 for which Bertolt Brecht supplied almost all the texts.

A long-overdue rehabilitation of a composer who for many years was known above all as the German Democratic Republic’s artistic spokesman!

Eisler’s fight songs dedicated to the working class continue to be remembered today – especially the “Solidaritätslied” and the “Einheitsfrontlied,” which later became popular tradition both in East Germany and among the Left in West Germany.

Marching may have fallen somewhat out of fashion, but this does not at all diminish the impact of these songs. We enjoy the intensive presentation of the performers even more while they find precisely the right middle position between ambitious and unassuming artistry.

All the songs receive terrific performances. Holger Falk has a clear, cleanly focused baritone that can run the gamut from a honeyed piano to something more like an impassioned shout...There’s also an ideal balance between sophistication and rawness, a certain neutrality of interpretation that will bear repeated listening but doesn’t betray the gritty roots of the music.