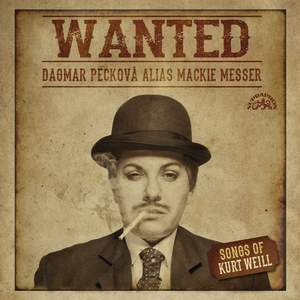 Kurt Weill, Ogden Nash: One Touch of Venus: I'm a Stranger Here Myself

Recorded at the Czech Radio – Studio Karlín, Prague, July 2016. “We cannot approach opera from the position of snobbish dismissal. We cannot write operas while at the same time lamenting the deficiencies of the genre. We must fulfil our own ideal by making use of that which the stage has to offer,” so wrote Kurt Weill in 1926. At the time, he had just begun seeking a new musical genre, one that would supersede the conventional opera.

The resounding success of Die Greigroschenoper proved that the path he had taken was the right one; the new genre emerged at an appropriate time, and it seemed that the audience had been waiting for opera’s resurgence too. The result of his efforts were considerable simplification of the musical idiom,

inspiration by pop and jazz, and the assignment of the vocal parts to actors without traditional professional voice training. It was a true revolution.

Dagmar Pecková has throughout her illustrious career has appeared on the world’s most prominent stages as an artist acclaimed as a refined performer of music by Mozart, Mahler, Bizet ...

The singular poetics of Weill’s songs, a fabulous orchestra and splendid arrangements blending classical music and jazz – and, of course, Dagmar Pecková, who has never been “just” a diva, but a singer who makes her dreams come true and does everything with great enthusiasm.

her mezzo has an authentic rasping edge. Terrific accompaniments, too.