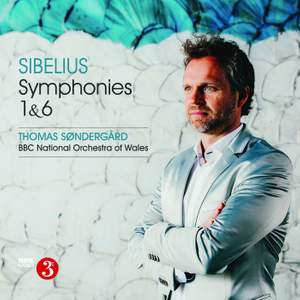 Their recording debut, Symphonies 2 & 7, revealed Søndergård to have a profound understanding of the great Finnish composer. Sibelius has been a major feature of Søndergård's relationship with the BBC NOW since their debut eight years ago; their widely acclaimed Proms performance of the symphonies was a highlight.

Symphony No. 1 combines the best of Russian romantic orchestration and melodic magic with a distinctive Nordic character and wonderful contrasts of texture and colour.

In the Sixth, Søndergård's detailed reading highlights the many felicitous touches in Sibelius' writing and conjures heavenly tones from the strings in the closing bars.

This recording will cement their partnership as one of the great new Sibelius teams.

I like the way Søndergård keeps all the surfaces unvarnished and the woodwind voices keen and folksy. The plain-speaking quality makes for a really elemental sound, with climaxes in the First Symphony’s first movement craggy and rough-hewn. There is a transparency, too, with the prominence of inner parts illuminating the harmony in interesting ways

stands out well in an overcrowded market. Under the baton of principal conductor Thomas Søndergård, the BBC National Orchestra of Wales plays with punch and vitality...In both works, Søndergård keeps the tempi flexible and brings out unexpected, elusive detail. The Sixth is fresh, clean-edged and yet, as ever with Sibelius, tender.