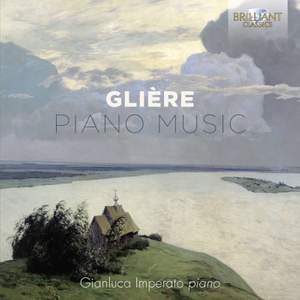 Working in all the standard genres from string quartet to symphony, sonata to concerto, ballet to opera, Reinhold Glière never attained the fame of his contemporary Rachmaninov, but his music is no less recognisably Russian, no less filled with long and aching cantabile melodies; the significant point of contrast is that Glière, who never left Russia, was not afflicted with the pervasive melancholy that so memorably colours Rachmaninov’s music.

The difference is quickly apparent in the 30 Preludes which are Glière’s major contribution to piano literature. The C minor Second may very obviously be written in the shadow of Chopin, but most of the major-key examples enjoy the carefree mood of a relaxed, Russian Brahms. Nearly all of them invite words to be sung with them, such as the spring-like No.7 or the Romance of No.15. For pianists and lovers of Romantic piano music alike, the Preludes of Glière should be a joyful discovery.

On his debut recording for Brilliant Classics, Gianluca Imperato complements the Preludes with selections from other, slighter keyboard collections: the Kinderstücke Op.31, 12 Sketches Op.47 and then the Two Piano Pieces Op.99 dating from 1955: an impromptu for left-hand alone which is not to be confused with his Op.35 No.9 (a favourite miniature for violin and cello recitals); indeed neither it nor the companion Melodie have been recorded before. They show that at the age of 80, Glière could still pen music that was remarkably refined, calm and melancholy; suspended in time, or beyond the reach of events.

Reinhold Glière (1875-1956) was a Russian composer and violinist. His works draw inspiration from his great example Chopin, as well as from various other Russian composers and contemporaries: Rachmaninoff, Scriabin for his harmonic and pianistic style, and Khachaturian and Kabalevsky for the folklore elements and Soviet realism.