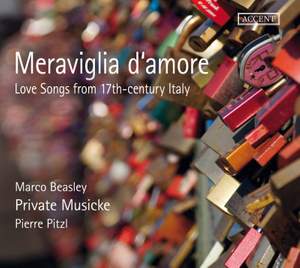 The programme of this disc brings together pieces by Italian authors from the first half of the 17th century, both vocal and instrumental pieces, here performed by a period guitar ensemble. Many of the included works are signed by lesser-known composers, such as Antonio Carbonchi, Biagio Marini, Michaelangelo Galilei, or Angelo Michele Bartolotti, but the disc also includes pieces by Girolamo Kapsberger, one of the most famous theorbo players of his time, and Francesco Corbetta, “the greatest guitar player”, according to his contemporary Gaspar Sanz. The songs presented on this recording centre on love, moving in a labyrinth which includes hope, sorrow, optimism, disappointment and joy. Marco Beasley is a specialist in 17th-century vocal music and has some fine recordings to his name. His light and agile voice is excellently suited to these fine Italian delights of the early Baroque period. He is accompanied by Private Musicke under the direction of Pierre Pitzl, great experts in this kind of repertoire.

a real gondolier’s gem, catchy as a cold in shapely phrases, balanced symmetry and simple, intriguing harmony. Beasley’s light tenor has a plaintive, seductive quality, irresistible to the ear when gentle – which, in this repertoire, is always.