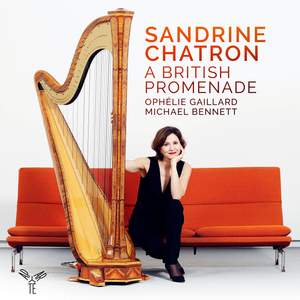 Howells: Prelude No. 1 for Harp

I. Andante. "Now is your Turne, my Dearest, to be Set"

III. Allegretto. "These Springs were Maidens once that Lov'd"

IV. "My God! Look on me withe'Eye". Slow but Freely

V. Allegro. "If Nine Times you your Bridegroom Kiss"

Sandrine Chatron has appeared both as a concert artist and as a chamber musician across Europe, Asia and North America. She is a member of the French Chamber Music Group Calliopée as well as the trio Polycordes, and plays regurlary with musicians such as Ophélie Gaillard, Nicolas Dautricourt, Lise Berthaud, Gordan Nikolic, Michael Bennett and the Elias string quartet.

She performs regularly with the Ensemble Intercontemporain and has worked with the principal French orchestras, The Monteverdi Choir and Orchestra, the Mahler Chamber Orchestra, the Berliner Philharmoniker, and the Lucerne Festival Orchestra. Solo recordings include a recital disc of French Music for Naïve/Ambroisie, and disc played on an 1798 Erard Harp « Le salon de musique de Marie Antoinette » also for Naïve.

Here she is partnered with Ophélie Gaillard and Michael Bennett in a selection of mid 20th-century compositions by composers, mostly trained at British institutions by British teachers, who became significant educators themselves.