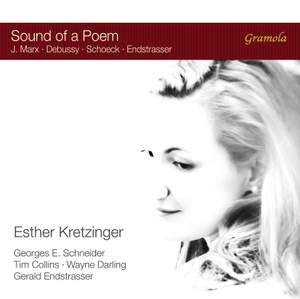 Sound Of A Poem

After attracting attention with her clear soprano voice in the classical and opera genre, German singer Esther Kretzinger discovers new paths with her second album Sound of a Poem. Together with a small jazz ensemble of international repute, she sheds new light on a special selection of Romantic and Impressionist songs by Claude Debussy, Joseph Marx and Othmar Schoeck. With the Swiss violinist Georges-Emmanuel Schneider, New York vibraphonist Tim Collins, renowned bassist Wayne Darling and Austrian drummer Gerald Endstrasser, Esther Kretzinger works out the essence of these songs in the language of jazz, showing that the differences between Impressionist music and jazz often lie more in external features such as sound colour, articulation and instrumentation rather than their artistic cores