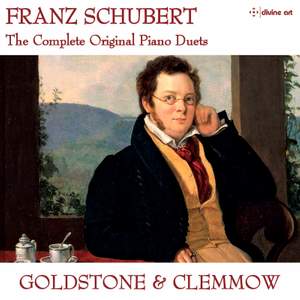 Schubert: Polonaise and trio, D. 618a (completed by A. Goldstone)

Schubert: Allegro moderato in C major and Andante in A minor, D968

First released on 7 separate CDs by Olympia, it remains the only complete recording of Schubert’s original duet compositions including many little-known masterpieces and one Polonaise completed by Goldstone from Schubert’s unfinished manuscript. The performances are superb: the husband and wife team really do play like one person with four hands. Tragically, Anthony Goldstone died on January 2, 2017 did not live to see the re-issue of this marvellous collection.