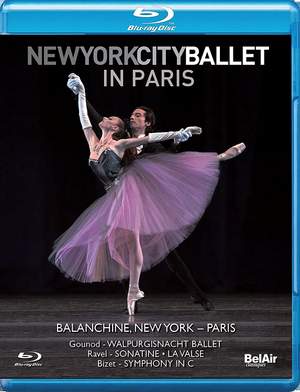 The New York City Ballet, with its collection of extraordinary dancers and its unique repertoire, is one of the most prestigious dance companies in the world. This exceptional production, performed in Paris after eight years of absence, revolves around three great French composers who inspired NYCB founder George Balanchine: Charles Gounod, Maurice Ravel and Georges Bizet. The four ballets performed, choreographed from 1925 to 1980, perfectly encapsulate Balanchine’s genius and his very own neoclassical style. They also provide a particular insight on the bonds that tied Balanchine to France. What is known today as Walpurgisnacht Ballet was a ballet choreographed for the opera Faust (Charles Gounod) at the Paris Opera in 1975. It premiered as an independant piece in New York in 1980. Sonatine, set to a music by Maurice Ravel, was created by two New York City Ballet French principals, the recently departed Violette Verdy and Jean-Pierre Bonnefoux. La Valse was originally composed by Ravel for the Ballets Russes and Serge Diaghilev, then exiled in France, shortly before Balanchine entered the company. Symphony in C (Georges Bizet), better known as Le Palais de Cristal, premiered at the Paris Opera. A spectacular tribute to Balanchine, beautifully served by the breath-taking technique of these American dancers, who rank today among the best in the world!