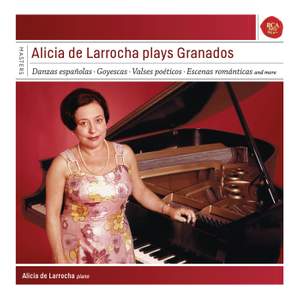 Part I, I: Los requiebros. Allegretto

No pianist has been more closely associated with the music of Granados than Spain’s beloved Alicia de Larrocha. Praising her in this repertoire, wrote ClassicsToday.com “is tantamount to giving fresh air a good review”. The new 3-CD release collects her last traversals of this music in the studio, made for RCA in the late 1980s and early 1990s. The most substantial of these haunting works is Granados’ masterpiece Goyescas. In Alicia de Larrocha’s valedictory recording from 1989, “her seasoned mastery of Granados’ complex textures and innate affinity for his colorful idiom assert themselves in every measure. You won’t find a more recommendable Goyescas” (ClassicsToday.com).