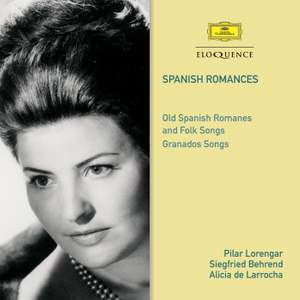 When Pilar Lorengar died, a little over 20 years ago, at the age of 68 in her adopted city of Berlin, the tributes were unanimous for ‘one of the most beautiful voices heard in the post-war era’ (The Independent). She had grown up in Zaragoza, and always treasured her introduction to the musical stage, practically as an infant, in a zarzuela troupe. Thus she learnt how to hold a stage, deliver a line and captivate an audience almost with her mother’s milk.

Those lyric-dramatic qualities distinguish the two albums compiled here. Issued originally on a DG LP, new to CD and freshly remastered are the Spanish ballads on CD1, arranged by the guitarist Siegfried Behrend for himself and Lorengar. These are vivid musical postcards, variously pastoral, sacred or vernacular in tone, with melodies which have become well-known in other contexts such as Falla’s Siete canciones populares españolas and his Harpsichord Concerto. Complementing the folksongs is a genuine Handelian rarity: No se emenderá jamás, an early cantata with an original Spanish text, where Lorengar and Behrend are joined by the gambist Richard Klemm.

‘A charming voice and exemplary diction,’ Gramophone’s original reviewer could not help noticing of Lorengar in March 1967. Years later, on the 25th anniversary of Lorengar’s debut at the Deutsche Oper Berlin, its Intendant Götz Friedrich commented: ‘She has made our ears clear and opened our hearts … the purity of her tone is grounded in harmony of person, voice, character and personality.’

A decade on from the album of folksongs, Lorengar had become a Decca artist, making delightful contributions to complete opera sets such as Mozart’s Così fan tutte and Die Zauberflöte (conducted by Solti). With the label’s ‘house’ Spanish pianist, Alicia de Larrocha, she recorded an album of tonadillas by Granados in which native wit and warmth shines from every bar, responsive to every quick turn of emotion. Reflecting in 2003 on her career as a whole, Max Loppert in Opera noted this distinctive quality: ‘I cannot think of another soprano of the period who could so freely soar and be plangently affecting at one and the same moment.’

Lorengar’s singing is luminous, passionate and technically polished in this appealing programme of songs with guitar (Siegfried Behrend) and piano (Alicia de Larrocha).

[Lorengar] is at her best in some of the Canciones amatorias; in the delightful ‘Iban al pinar’ or in ‘No Iloréis ojúelos’, with its generous flowering of melody… [de Larrocha] has an utterly natural rightness of touch in this music… A record that offers playing of this quality can hardly be ignored