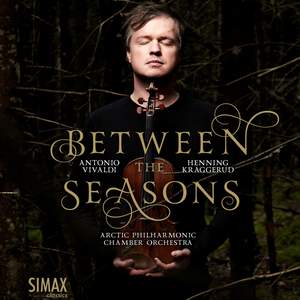 Vivaldi: Concerto No. 1 in E Major

Vivaldi: Concerto No. 2 in G Minor

Kraggerud: Postludium in B flat Minor from Equinox – 24 Postludes in all keys for Violin and Chamber Orchestra

Vivaldi: Concerto No. 3 in F Major

Vivaldi: Concerto No. 4 in F Minor

The extreme - wind, snow, cold, rainfall, thaw and heat - are vividly experienced in Kraggerud's interpretation of The Four Seasons. Henning Kraggerud manages to capture the climatic range experienced on top of the world in his music-making.

Inspired by Kremer and Desyatnikov's combination of Vivaldi and Piazzolla, Kraggerud has included four of his own works in-between the seasons. The pieces chosen evokes different connotations and new angles through which we can experience the world's most popular classical work. Kraggerud's pieces both comment and contrast Vivaldi's moods - positioned as it were between the seasons, forming an eight spoke wheel.

The album is accompanied by poetic liner notes from author Erik Fosnes Hansen, chronicling Vivaldi's life story and relating it both to the music and also the sonnets that were printed along with the original work: 'These admired and loved musical illustrations are like tapestries from a vanished era. They tell of simple, ordinary things that happen in the seasons, with all the drama that can lie in such simple and ordinary events. But just as a year has its seasons, so too does a life. So, let us look more closely at the life of this composer.'

Erik Fosnes Hansen is a Norwegian award-winning author, his work is translated into more than 30 languages.