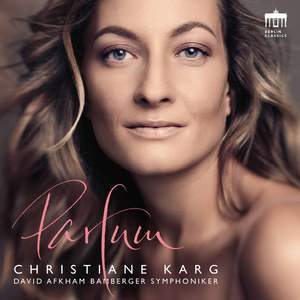 The Bamberg musicians are too interested in the sheer, the precise and the subtle [in the Ravel] to stumble into cheap exoticism. The colours are sharp in Britten’s Quatre chansons françaises,... — BBC Music Magazine, September 2017, 4 out of 5 stars More…

III. L'Indifférent (The Indifferent One)

The German soprano talks to Katherine about her new disc of French song, out now on Berlin Classics.

Christiane Karg is one of the most-sought-after lyric sopranos of the present day, acclaimed for her embodiment of operatic roles and as a lieder, concert and oratorio singer. She can be seen and heard all around the world: at lieder recitals in New York’s Carnegie Hall and in the Vienna Konzerthaus, at La Scala in Milan with her 2016 debut in “Der Rosenkavalier”, at regular guest appearances at the Munich State Opera and the Chicago Lyric Opera House, at the Salzburg Festival and at the Royal Opera House London. At the end of 017 she will give her debut at the famous MET Opera in New York (The Marriage of Figaro) and the Vienna State Opera.

David Afkham is Principal Conductor of the Spanish National Orchestra and Chorus. He is in high demand as a guest conductor with some of the world’s finest orchestras and opera houses The Bamberg Symphony – Bavarian State Philharmonic has always enjoyed a special status in the music world.

This album is pure poetry – taking its spark from Christiane Karg’s engagement with the poetical works of Charles Baudelaire, Leconte de Lisle, Paul Verlaine, Tristan Klingsor and Victor Hugo. A poetry in diction that has a wonderful affinity with Impressionist music at the turn from the 19th to the 20th century. Christiane Karg finally decided upon works by Duparc, Koechlin, Debussy and Ravel for her new album. Her selection also includes an early composition by Benjamin Britten, which in its turn was inspired by Debussy and Ravel. Christiane Karg’s voice wafts this poetic scent, these colours in sound, aloft.

Poetry and music, words and voice blend into “Parfum”!

The Bamberg musicians are too interested in the sheer, the precise and the subtle [in the Ravel] to stumble into cheap exoticism. The colours are sharp in Britten’s Quatre chansons françaises, the final chords beautifully taut…David Afkham keeps the textures transparent while Karg sustains a steady gleam. Koechlin’s Épiphanie is deliciously intimate.

Surrender to the intoxicating perfume of the French impressionists...sung with a ravishing mix of purity and sensuality by Christiane Karg, accompanied by the Bamberger Symphoniker under David Afkham. So much beautiful music on one disc should not be allowed.

Karg's voice is allowed to emerge in its splendour and fullness...The Bamberg Symphony are on fine form for David Afkham, too.

she sings most eloquently, soaring above the Wagnerian orchestrations… the entire programme is well thought-out and a source of delight.

her delivery [is] poised in the sweet spot between urgency and a heavy-lidded, don’t-rush-me languor...She’s at one with David Afkham’s smoothly responsive orchestra, but manages to impart the feeling that she’s singing everything in her own sweet time – this music’s style to a T.