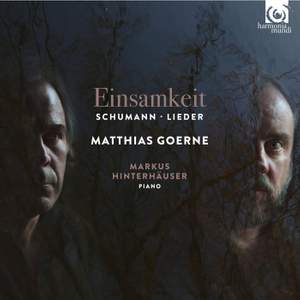 Goerne is a virtuoso of the recording studio. He mostly keeps to a subdued, intimate murmur, and his molten legato is barely touched by consonants…Hinterhäuser’s flexible, tender accompaniment... — BBC Music Magazine, July 2017, 5 out of 5 stars More…

Following the Matthias Goerne Schubert Edition for harmonia mundi, a venture that has revealed his stature as the foremost interpreter of lieder, especially at its darkest, Matthias Goerne has now selected 19 gems, lovingly fashioned by Schumann in the year of his marriage (1840). They are contrasted with those of the Düsseldorf period (1849-52).

From the fragrant flowers of the bouquet of ‘Myrtles’ to the nocturnal atmosphere of the ‘Six Poems and Requiem’ the mood spans Schumann's joy in his marriage to his beloved Clara but also the darkest despair: in which he erects a worthy monument to his soulmate, the poet and arch-melancholic of his time, Nikolaus Lenau. An enchanted, sometimes brooding, nocturnal atmosphere dominates these impressive songs, whose piano accompaniment – hardly coincidentally – recalls the tone of Chopin’s Nocturnes, played here by Markus Hinterhäuser, artistic director of the Salzburg Festival and regular collaborator with Matthias.

Goerne is a virtuoso of the recording studio. He mostly keeps to a subdued, intimate murmur, and his molten legato is barely touched by consonants…Hinterhäuser’s flexible, tender accompaniment evokes the private interiors in which these songs were sung. Both artists consciously understate and underplay, reminding us that true aloneness looks inward. If you buy just one song recording this month, this should be it

Goerne’s baritone now has some wear but it remains beautiful. There’s an impressive control of line and a lovely veiled piano tone in the upper end of his range; the breaths, deep and long, seem to be drawn from a deep emotional well…Hinterhäuser deserves a special mention, too. He coaxes a tone of supreme pearly beauty from his Steinway and matches Goerne note for note in terms of creating the disc’s beguiling atmosphere

Displaying no signs of vocal wear and tear after his recent taxing Wagner assignments, the German baritone brings consummate delicacy and tenderness and a lovely sepia palette to the songs (mainly nocturnal in mood) which Schumann composed during the year of his marriage and those written towards the end of his creative life.

the combination of Goerne’s distinctively veiled tone and care over every word and nuance with Markus Hinterhäuser’s equally punctilious accompaniments, turns them into a compelling sequence. Even ardent Schumann devotees should find something new here.

Before a single note is sung, the slightly hesitant reserve of Hinterhäuser’s piano introduction to Meine Rose (where the central metaphor is a rose “already drooping and pale”) sets a tone of introspection that clings to almost everything that follows. Think of the selection of music, predominantly from Schumann’s later output, as sung by Goerne for himself, in the melancholy of a closed room with little light