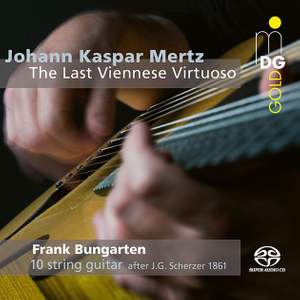 For his new recording featuring compositions by the guitarist Johann Kaspar Mertz, distribguished performer Frank Bungarten has selected a very special instrument: a contraguitar designed on the basis of an exemplary historical model by Johann Gottfried Scherzer with a series of additional bass strings on a second neck.

As a result, we now can experience the opulent sonority of Mertz’s works just as they were originally heard – now for the first time since the death of the “last Viennese virtuoso” in 1856.

For the posthumously published Fantasies op. 65 and the Harmonie du soir Mertz very evidently reckoned with additional volume in the bass. It is only on the ten-string contraguitar that these works can be played exactly as they are notated.

Mertz composed a total of thirty-four opera paraphrases for his instrument. His orchestral source material calls for the full sound of the contraguitar, and in Frank Bungarten Verdi’s Ernani too finds an interpreter who makes the difficult technique of the arrangement seem easy.