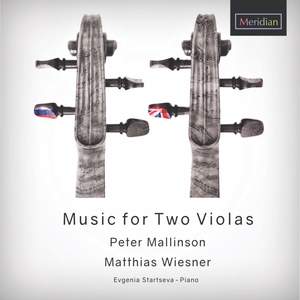 Druzhinin: Sinfonia a Due

Music for two violas is one of the most underexplored media in the chamber repertoire. The tradition dates back to at least the early eighteenth century when J.S. Bach wrote his Brandenburg Concerto No.6. Over the following three hundred years many composers have been drawn into its distinctive sound-world. This album, which includes works receiving here their first commercial recording, focuses on twentieth-century repertoire influenced in one way or another by two great pioneers of the instrument: Lionel Tertis and Vadim Borisovsky. It ranges from the sublime Lament of Frank Bridge, himself a virtuoso player, to the thought-provoking Meditations of Edmund Rubbra, from Borisovsky’s arrangements of such classics as Prokofiev's Romeo and Juliet to the dramatic and deeply moving Sinfonia a Due of Fyodor Druzhinin, one of Borisovsky's most brilliant students. Music for Two Violas takes the listener on a journey of unforgettable musical discovery.