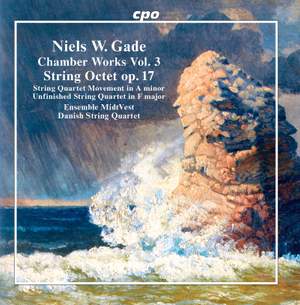 The performance by Ensemble MidtVest sounds well prepared, but not to the point of purging affection and spontaneity, and the warm-toned recording suits the musical approach very well. The Danish... — BBC Music Magazine, July 2017, 4 out of 5 stars More…

“We welcome the fact that cpo has now taken up Gade’s chamber music: it is wonderfully written and does not deserve to disappear into the footnotes of music history writing. The MidVest Ensemble completely dedicates itself to Gade and on this perfectly balanced recording performs the works with an open naturalness displaying his music in a highly favorable light.” This is what FonoForum wrote in 2016 about Vol. 2 of cpo’s Gade recording series based on the new historical-critical complete edition of his works. The compositional history of many of these works is long and complicated because Gade often submitted his earlier works to later revisions. However, the little information we have about the composition of his Octet enables us to sketch the following picture: Gade began his work on it at the very latest in early 1848. In its style, overall form, and in various details Gade’s octet shares some elements with Mendelssohn’s octet. It is highly probable that Gade wanted to honor his late friend and colleague in this work, which prescribes the same instruments as the young Mendelssohn’s work from 1825. The chamber music included on this release shows a growing artist influenced by his colleagues and mentors, but coming into his own style.

The performance by Ensemble MidtVest sounds well prepared, but not to the point of purging affection and spontaneity, and the warm-toned recording suits the musical approach very well. The Danish String Quartet also put up a strong case for the two early incomplete quartets

Ensemble MidtVest sound warm and secure, with tender solos from Matthew Jones’s violin in the A minor movement…[the Danish Quartet] blend well with their colleagues in the Octet but a closer sound that reveals the music’s weave might have aided the cause of a composer who is often more interesting under the surface than he is on top