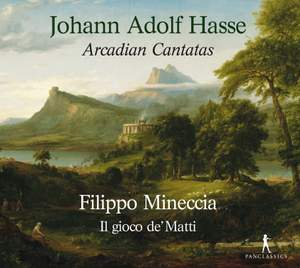 If you could travel back in time to the 18th century and ask a German or Italian who was most famous persons in music business, they would most likely have mentioned two different names: Pietro Metastasio and Johann Adolf Hasse. Metastasio and Hasse collaborated for the first time in Vienna in 1744. From then on they remained good friends and Hasse went on to compose music for virtually all of Metastasio’s librettos. But opera was not the only genre that attracted their attention. Whereas dramatic librettos belonged to the realm of theatre, musical productions in private aristocratic homes favoured the smaller form of the chamber cantata; an exquisitely chiseled piece of pure music where the true virtuoso performer had a chance to showcase his or her most refined vocal skills.

The countertenor Filippo Mineccia, acclaimed as one of the finest countertenors in the business, has selected for this album four Cantatas based on texts by Metastasio. The winning combination of his stories was a reliance on Greek tragedy, a pastoral musical idiom ('Arcadian') featuring happy innocent shepherds, and the celebratory style that European courts enjoyed so much.