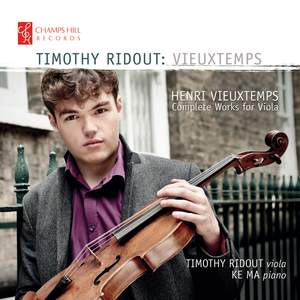 [Ridout] offers a gorgeous tone, a thoughtful approach to phrasing, and an infectious sense of impetuosity…there is plenty to enjoy here in terms of poetic flow — Gramophone Magazine, June 2017 More…

Vieuxtemps: Etude for Viola and Piano

Winner of the 2014 Cecil Aronowitz International Viola Competition, Timothy Ridout, joins together with his pianist duo partner, Ke Ma, to record his debut album with Champs Hill Records. This album, which is the result of Timothy’s success at the CAIVC, presents the complete Viola works of Henri Vieuxtemps and includes two sonatas, small virtuoso gems and an Etude. Timothy Ridout says of the release: “Henri Vieuxtemps was one of the greatest violin virtuosi of the 19th century, and as a boy was compared to Paganini, though his compositions often neglected. I believe this is largely due to the fact that he is thought of as a composer solely for the violin, writing music filled with pyrotechnics. However this isn’t true. Vieuxtemps also loved the viola, and it is in his viola works that his lyrical, operatic style is most apparent.” Born in London in 1995, Timothy studied at the Royal Academy of Music with Martin Outram, graduating with the Queen’s Award Excellence. He went on to the Kronberg Academy in Germany studying with Nabuko Imai, Tabea Zimmerman and Lawrence Power. Ke Ma also studies at Royal Academy of Music under the tutelage of Professor Christopher Elton. During her studies, she won numerous prestigious international competitions such as the Shenzhen International Piano Concerto Competition (2014) and the 18th Concours International de Piano de la ville de Maisons-Laffitt in France (2016).

[Ridout] offers a gorgeous tone, a thoughtful approach to phrasing, and an infectious sense of impetuosity…there is plenty to enjoy here in terms of poetic flow