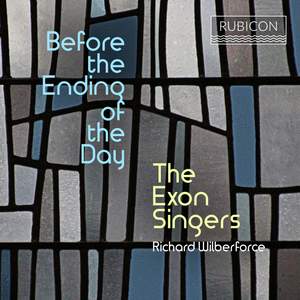 Before the Ending of the Day

High marks not just for the CD, but for the Exon Singers’ splendid 50 year story, which this recording celebrates … The singing is bright and committed — Choir & Organ, July 2017, 4 out of 5 stars

Goodenough, D: Psalm 133. "Behold how good and joyful a thing it is"

Jackson, F: A Hymn to God the Father

Chapple: Safe where I cannot lie yet

Wilberforce: My Soul, there is a country

Over the years the Exon Singers have received considerable recognition for their commitment to commissioning and recording new works from eminent composers. For their 50th anniversary CD on new label Rubicon Classics, they have selected some of their favourites in the form of an extended service but without spoken word. Most of the music was written for the choir's annual broadcast of Choral Evening Prayer from Buckfast Abbey. Since 1997 Composers-in-Residence have been invited to their summer Festival in Tavistock, on the edge of Dartmoor, and their works are represented here. The choir’s performances include the Oxford Festival of Contemporary Music and the Edinburgh Festival, as well as concerts in St John’s College, Cambridge, Gloucester, Wells, Winchester and Salisbury. Richard Wilberforce has been Conductor and Artistic Director since 2012, succeeding Matthew Owens, and here writes his first works for the Exons: a set of opening responses and a new Festival Hymn.

High marks not just for the CD, but for the Exon Singers’ splendid 50 year story, which this recording celebrates … The singing is bright and committed