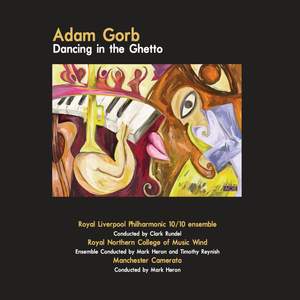 Adam Gorb: Dancing in the Ghetto

Gorb: Dancing in the Ghetto

Gorb: Symphony No. 1 in C Major

Composer Adam Gorb (b. 1958) received his composition training at the Royal Academy of Music in London, where he received highest honors upon graduating. Gorb writes a wide variety of music, including orchestral works, chamber pieces, solos, and choral works. His pieces have been recorded, performed, and broadcast all over the world. Gorb is currently Head of School of Composition at the Royal Northern College of Music in Manchester. This release contains Gorb’s compositions “Dancing in the Ghetto,” “Weimar,” “Symphony No. 1 in C,” “Serenade for Spring,” and “Love Transforming.”