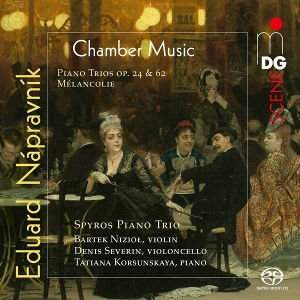 For more than fifty years Eduard Nápravník conducted at the Imperial Opera in the Mariinsky Theater in St. Petersburg. The legendary renown of this theatre very much goes back to the “Nápravník Era.” The Spyros Piano Trio demonstrates on the recording premiere of Nápravník’s two piano trios that the gifted orchestral conductor was also an outstanding composer – all of this on this SACD now being released on MDG.

Born in 1839, he conducted the premieres of operas such as Tchaikovsky’s The Queen of Spades and Mussorgsky’s Boris Godunov. Nevertheless, in his own works one is occasionally reminded of Verdi.

The members of the Spyros Trio, Tatiana Korsunskaya, Bartek Niziol, and Denis Severin, came together by chance to perform chamber music by Louise Adolpha Le Beau. The resultant MDG recording immediately received rave reviews and in 2015 was awarded the coveted ECHO Klassik prize.