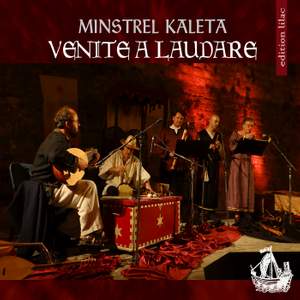 Once upon a time the streets and squares were the busting medium of social life. Shared by princes and beggars, they saw scenes of abject poverty and opulent display, as the preoccupations of the worldly and of the spiritual life intermingled. Once on roads and in markets it was barely possible to determine the boundaries between the profane and the sacred, the affirmations of holy ritual and those of the personal, and a special group of people blurred these distinctions entirely. They were the minstrels, traveling musicians, singers and players who with equal ardor cheered both the passing nobility and the common people. This new release features recordings of popular medieval pieces, featuring one of the leading Balkan-based Medieval music groups, performing on period instruments.