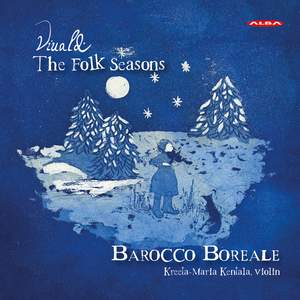 Concerto for Strings in C Major, RV 114: I. Allegro

Vivaldi’s famous Four Seasons sway listeners’ emotions by depicting how country-folk in 18th-century Italy react to the joy of Spring, the heat of Summer, Autumn wine and Winter storms. In north-western Finland, the ancient tradition of folk-fiddle playing in Kaustinen has nurtured a new generation of string players, leading to the formation of two world-class orchestras (modern and baroque) in the region. Bringing together international soloists, baroque specialists and folk-musicians, Barroco Boreale is guided by Baroque principles and Italian style, bringing to life Kreeta-Maria Kentala’s vision of the contrasts of the Finnish climate, from winter sports to midnight sun in summer. Violinist Kreeta Maria Kentala is a pioneer in the movement for Finnish early music. She performs as a soloist, an ensemble leader, and a pedagogue of Baroque, Classical, and Romantic music as well as folk music. She is active in the Folk Musician Association as a board member as well as in arranging folk music jam sessions.