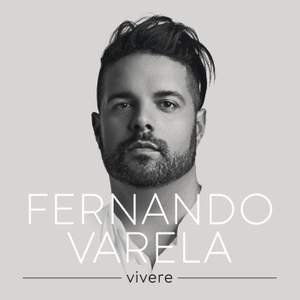 Stephen Aiello: I Believe In You

Eric Carmen: All By Myself

Patrick Hamilton: No Longer On My Own

It’s just that simple. He does not sing just because he has a beautiful, expressive voice. He does not sing just because it brings him success and house-rocking acclaim. Fernando Varela sings because that is who he is. He sings what he loves, whether it is a pop standard, an original song he had a hand in writing, or Puccini’s noblest tenor aria “Nessun dorma.” The underlying truth – who he is and what he does, in everything he dreams and achieves – is what brings Fernando Varela to the center of a worldwide stage with the release of Vivere.

The high wire act of this powerhouse voice can wow all kinds of audiences, from the opera house to a small club. If most tenors live in one sphere and like to dabble in another, Fernando Varela wants to embrace them all and reinvent the possibilities.

He puts that dream on the line with Vivere.

On his new album, the classically trained tenor bridges the gap between immortal Puccini arias such as “Nessun Dorma” and catchy pop hits like Christina Perri’s “A Thousand Years” (from the Twilight Saga).