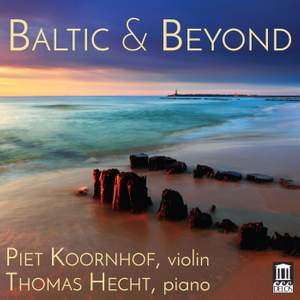 Kancheli: Time... and again for violin and piano

Vasks: Music for a Summer Evening

Among the most notable regional sources of soulful and spellbinding new music have been the Baltic nations – once part of the Soviet Union – with Arvo Pärt (Estonia), Peteris Vasks (Latvia) and Balys Dvarionas (Lithuania) among the region’s most prominent composers. Works for violin and piano by all three of these Baltic voices – as well as by Giya Kancheli (from Georgia, another former Soviet republic) – are featured in this hypnotically beautiful album that celebrates, in part, the composers’ new-found freedom from a repressive Soviet regime. Distinguished South African violinist Piet Koornhof – one of Delos’s most prolific recording artists – is partnered here by the renowned American pianist Thomas Hecht in a program largely characterized (as Koornhof puts it) by “stillness and closeness to the heart,” as well as “strong meditative and spiritual overtones.”