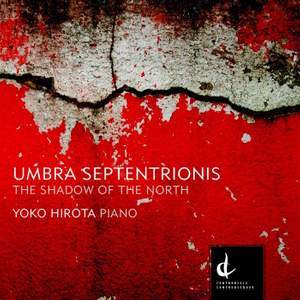 Piano Piece No. 3 "Leaps of Faith"

8 Songs Without Words: No. 5, Impérissables lotus

Umbra Septentrionis (The Shadow of the North) signifies two ideas: Northern Ontario, Yoko Hirota's residence for the last sixteen years, and Canada, the Northern country to many Europeans. Umbra Septentrionis features solo piano works by ten Canadian composers. Four of the works featured were written for Yoko Hirota and were premiered at La Chapelle historique du Bon-Pasteur and PianoFest recitals, respectively. The musical language of each of the ten composers is distinct and unique: each composition revealing aspects of a powerful musical personality. Having been praised by the press as "precise and keenly projective" and demonstrating "the highest level of proficiency," Japanese-Canadian pianist Yoko Hirota is considered one of the leading interpreters of contemporary piano repertory of her generation. Yoko Hirota is a strong advocate of contemporary music in particular music by Canadian composers. Yoko's first album, The Piano Music of Arnold Schoenberg with 17 Fragments, was released to critical acclaim and was listed as one of the "essential tracks" by The Globe and Mail.