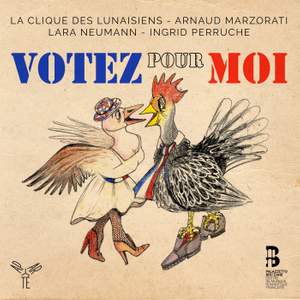 Louis XIV and Napoléon were well aware of music as an effective means of propaganda. The 19th century saw a succession of antagonistic governments, creating an infinite repertoire of satirical and demagogic works dedicated to elections and sovereignty.

La Clique des Lunaisiens, directed by Arnaud Marzorati, specialises in bringing forgotten French chansons back to life. This 'Vote for me!' recital commissioned by the Palazzetto Bru Zane in 2016, is an escapade worth relishing into the world of politics. Witness the exercise of rhetoric, popular complaint and deceitful manipulation. Any resemblance to current political upheaval is purely coincidental.