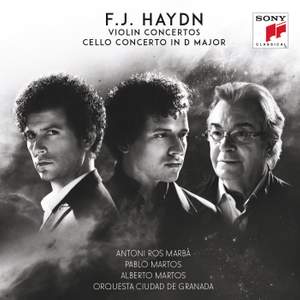 Pablo and Alberto Martos come together in this magnificent recording of Haydn’s violin and cello concerti. Recorded with conductor Antoni Ros Marba and the Orquesta Ciudad De Granada. Both Pablo and Alberto came together for their last Sony Classical album – a recording of J.S. Bach’s ‘Goldberg Variations’, arranged for string trio – which received critical acclaim. Alberto Martos was personally selected by Daniel Barenboim to participate as co-principal cellist in the West-Eastern Divan Orchestra. Pablo and Alberto have performed at some of the most prestigious venues in the world, from the Teatro all Scala, The Royal Albert Hall, Carnegie Hall and the Berlin Philharmonie.