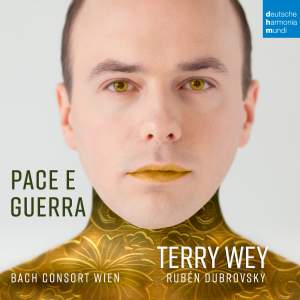 Terry Wey was the leading soprano soloist of the Vienna Boys’ Choir. He has worked under some of the leading conductors in the world today & has been invited to perform at some of the most important venues in the world such as Musikverein Wien, Barbican Centre, Concertgebouw Amsterdam, Lincoln Centre New York & more. In this album, Wey appears with the Bach Consort Wien – one of the most prominent baroque ensembles in Austria and founded by director Ruben Dubrovsky in 1999. In recent years, the orchestra has distinguished itself as an opera orchestra and performed in the Austrian premiere of Porporas Polifemo as well as performing for the first time in Vienna, Mozart’s ‘La clemenza di Tito’ on original instruments. Countertenor Terry Wey selects the most beautiful arias written for one for one of the leading castratos of the early 18th-Century - Antonio Maria Bernacchi (1685-1756). As well as 3 well-known Handel arias, the album features x7 world premiere recordings of works by Pietro Torri (1650-1737), Domenico Sarros (1679-1744), Johann Adolf Hasse (1699-1783), Carlo Francesco Pollarolo (1653-1723) & Leonardo Vinci (1690-1730).