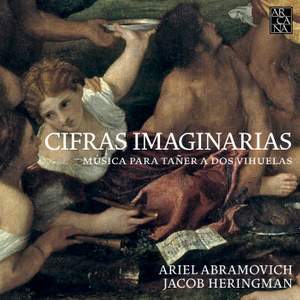 Crecquillon: Mor me a prive (Arr. by Francisco Fernández Palero)

A leading vihuela specialist, the Argentinian virtuoso Ariel Abramovich has already devoted two albums to the favourite instrument of the Iberian Renaissance, the first on Arcana (Esteban Daça, El Parnasso, A316, 2002) and the second on Carpe Diem (Diego Pisador, Si me llaman, 2009). For this third instalment he is joined by one of the world’s most respected and innovative solo lutenists, Jacob Heringman, for a vihuela duo project which is the result of years of research and performing. While there is a significant number of publications for two lutes from the sixteenth century, only one of the seven collections for vihuela de mano includes duets, and it is precisely that collection that was the main source of inspiration for this project. The performers, both highly experienced with intabulations of sixteenth-century music, decided to recreate an ‘imaginary’ book of vihuela duets, following the taste and practice of the ancient masters, who through a notation system of ‘numbers’ used to arrange works by the composers they listened to and played. Cifras Imaginarias is the poetic name they have given to an imaginary music collection of vihuela duos of the kind that might have been published in the mid-sixteenth century.