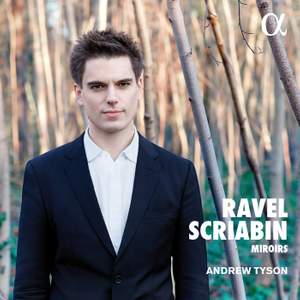 Not everything Tyson does will suite every taste, yet his stunning keyboard mastery and strong personality undoubtedly command attention in this superbly engineered, fulsomely annotated release — Gramophone Magazine, June 2017 More…

I. Noctuelles in D-Flat Major

After his first recording, devoted to Chopin (ZZT347), and the award of First Prize at the Géza Anda Competition in 2015, which gave a substantial boost to his career, the young American pianist Andrew Tyson has devised a new programme to showcase his talents: two sonatas and a waltz by Scriabin coupled with Ravel’s Miroirs.

Andrew Tyson has chosen to associate two composers whose language seems to divide them, but who nevertheless have many things in common, notably their use of tonality, of certain unusual harmonies and of dissonance. Alexander Scriabin and Maurice Ravel also lived in the same city, at the same period, without ever meeting: Debussy, Ravel and the French musical elite of the period regarded their Russian colleagues as crude and uneducated. Yet when one listens to their music, even if their approach to the piano and to composition could hardly be more different, it is apparent that they use tone colours in the same way. For Andrew Tyson, ‘Ravel is an elegant perfectionist, whose every detail is calculated and glitters like crystal; Scriabin is like a flickering flame – passionate, reckless, spontaneous and erotic.’

Not everything Tyson does will suite every taste, yet his stunning keyboard mastery and strong personality undoubtedly command attention in this superbly engineered, fulsomely annotated release