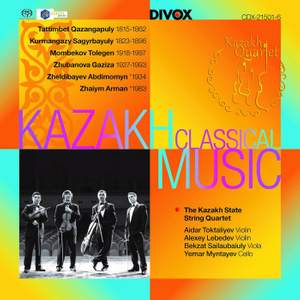 The «Kazakh State String Quartet» named in honour of Gaziza A. Zhubanova, was founded in 1988. It has won numerous prizes at international competitions and was elected best ensemble of the «Escuela Superior de Musica Reina Sofia» in Madrid. The members of the quartet received a Master of Arts (musical performance and chamber music) in Basel, Switzerland, in 2012 after studies with Prof. Rainer Schmidt (successor at the Walter Levin chair). The two string quartets of the important composer and music teacher Gaziza Zhubanova (1927-1993), as well as the quartet debut of the highly promising up-and-coming composer Arman Zhaiym (* 1983), are the focus of this new cultural bridge building production - realized on the 25th anniversary of the independence of the Republic of Kazakhstan in December 2016. These works are framed by important original compositions by Kazakh composers arranged for string quartets.