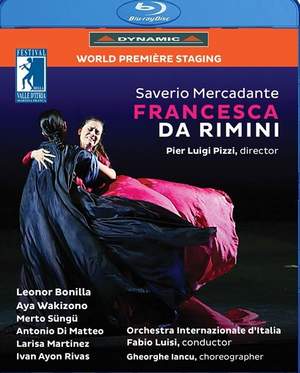 Fabio Luisi gets excellent playing from his orchestra – warm, tender strings in the Act 1 finale, fine obbligatos – and the chorus sings lustily. And the solo singing is stupendous. Merto Sungu... — Gramophone Magazine, May 2017 More…

Written almost two centuries ago by Saverio Mercadante, coveted by many theatres of the day, Francesca da Rimini was, in fact, never staged. Every time it was scheduled for performance, something happened and it got canceled. A long series of incidents prevented it from reaching the stage for as many as 185 years. Its forgotten manuscript, which was only known for its ill-starred fate, suddenly re-emerged five years ago in Madrid, teh city where it was to have been premiered in 1831. The soprano Leonor Bonilla is quite impressive in the part of the protagonist: she portrays the character's psychological frailty as well as her determination wtih a steely vocal technique, spinning out incredible modulations, displaying strong and dazzling vocalizations, easily soaring into the high register and flaunting such an attractive, casual and poignant stage presence that she even dares moving some dance steps with the corps de ballet. Aya Wakizono is an admirable Paolo: endowed with a superb mezzo voice, she seeks and achieves consistency throughout the range, is virtuosic in the coloratura, and fluent. No less demanding is the part of the tenor Lanciotto, with its fearful leaps and ornamentation worth of the Neapolitan Rossini: Mert Sungu might in time get rid of a touch of harshness here and there, but already now he can tackle all the difficulties of the part with a timbric quality and an expressively worth of note…

Fabio Luisi gets excellent playing from his orchestra – warm, tender strings in the Act 1 finale, fine obbligatos – and the chorus sings lustily. And the solo singing is stupendous. Merto Sungu is thrilling, Leonor Bonilla sings with bell-like clarity, with good coloratura and trills, and the Japanese Aya Wakizono is a mezzo in a thousand

the opera is …extremely well conducted by Fabio Luisi, who has the exact measure of style and substance. In the title role, the Spanish soprano Leonor Bonilla can do anything she pleases, it seems, with her pliable, expressive lyric soprano – an instrument that seemingly has no flaws and which she uses with consistent imagination