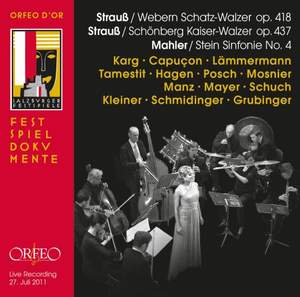 Sensitivity to [context] is a distinguishing mark of all three performances…too many other recordings of Stein’s version succeed only in sounding like mini-Mahler. This dares to go further, to... — Gramophone Magazine, June 2017 More…

The fact that this rare gem was considered lost and was only brought back into the repertory in 1993 thanks to a great deal of effort is astounding (even more so considering the relative success it has enjoyed since that time); a chamber-music version of Mahler’s Fourth Symphony by the Schoenberg pupil Erwin Stein for his ‘society for private performances of music’. The work was reconstructed from Erwin Stein’s notes in his score of the original symphony and his correspondence with Schoenberg. A tonally pleasing piece in itself, it also gives valuable insight into the compositional structure of the original and provides a creative contribution towards imagining the relationship between two highly important composers. After all, while the circle around Schoenberg truly venerated Gustav Mahler, he in turn took an active and certainly respectful interest in the new paths that Schoenberg had embarked upon. This recording is a fitting contribution to the Mahler anniversary year of 2011, marking the centenary of his death! This is matched by two irresistible, slightly quirky, yet idiomatically highly suitable, distorted Strauss waltzes by Webern and Schoenberg as ‘the icing on the cake’. All played by an incomparable ‘all-star ensemble’ featuring Renaud Capuçon, Antoine Tamestit, Clemens Hagen, Magali Mosnier, Sebastian Manz, Albrecht Mayer, Herbert Schuch, Martin Grubinger among others! They are joined in the last movement of the Mahler symphony by Christiane Karg, singing of ‘heavenly joys’…

Sensitivity to [context] is a distinguishing mark of all three performances…too many other recordings of Stein’s version succeed only in sounding like mini-Mahler. This dares to go further, to narrow the gap between the original and Schoenberg’s Chamber Symphony