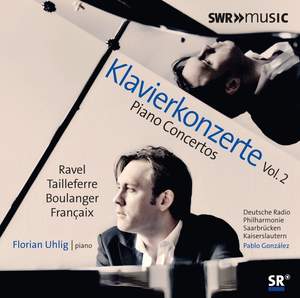 it is the pieces by Nadia Boulanger and Germaine Tailleferre that steal the limelight…[Ballade receives a] nuanced and devoted performance [of Ballade] from Uhlig and the Deutsche Radio Philharmonie... — BBC Music Magazine, May 2017, 4 out of 5 stars More…

In 2013 Florian Uhlig released a recording with French Piano concertos on SWRmusic (CD93302) which received excellent critics all over the world and became one of that year’s bestsellers of the label.

Florian Uhlig is again accompanied by the German Radio Philharmonic under Pablo Gonzales – a collaboration which already made his first recording of French Piano concertos a huge success.

This CD contains again piano concertos by Ravel and Françaix, which supplement the concertos of the 2013 recording, and rarely performed and very imaginative works for piano and orchestra with concert character by Germaine Tailleferre and Nadia Boulanger.

[in the Boulanger] Uhlig and González make a strong case for a piece that alternates between anguish and tender lyricism, with orchestration that presages Shostakovich. Even more appealing is Germaine Tailleferre’s lush Ballade, another seldom-encountered work that argues eloquently for a closer look at this composer’s prolific oeuvre…a disc as rich in musical insights as it is enjoyable