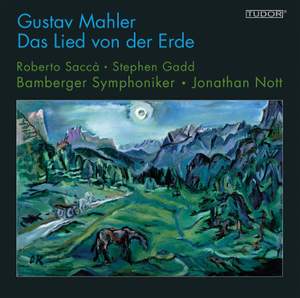 Both Gadd and Roberto Saccà tend to a wide vibrato at times. But it’s under control, and Saccà strikes me as ideal…best of all, Gadd injects real, tearful emotion into the great releases of the... — BBC Music Magazine, June 2017, 4 out of 5 stars More…

“…I believe it may well be the most personal of my works so far.” Gustav Mahler to Bruno Walter (1908). - The collaboration between the Bamberger Symphoniker, Jonathan Nott and Tudor began in 2003 with music of farewell, Schubert’s “Unfinished”. With the “Song of the Earth”, the British conductor now says goodbye to his German orchestra, having made history with the recording of Franz Schubert and Gustav Mahler’s symphonies.

Mahler’s “Symphony in songs, in six movements for large orchestra, tenor and baritone solo”, in fact his Ninth Symphony - related to Beethoven: ”Do you know the Creator, world?” - is the most moving music of hope and farewell in all of symphonic literature. The encounter with the “Song of the Earth” gives us “heavenly pleasures” while still on earth, in the “Drinking Song of Earth’s Misery”, in the hymns to “Spring, to Autumn, to Youth and Beauty” and in the “Farewell” that leads to a promise: “Everywhere and forever blue is the horizon, forever… forever… forever!” This was best expressed by Hans Werner Henze: “This music speaks as if in a thousand human voices, offering the simplest expressions for the most difficult conditions… While it contains much loss-induced sorrow, it also has messages for the future of mankind: one of these is hope, another - aimed at the very essence of music - is love.”

Both Gadd and Roberto Saccà tend to a wide vibrato at times. But it’s under control, and Saccà strikes me as ideal…best of all, Gadd injects real, tearful emotion into the great releases of the ‘Farewell’…in the Bamberg orchestra, Nott has a team of players responsive to his every nuance…[a] very singular and involving interpretation

The tenor, Roberto Saccà, sounds excellent. His heldentenor experience comes into its own here, ringing with great strength through the perils of the first song, even at the hell-for-leather climax of the ape howling amongst the tombstones. He then lightens the voice beautifully, with only a tiny shade of pushing, in the narrative of Von der Jugend, and he even manages some humour in Der Trunkene im Frühling.

The recording… does the performances justice… the SACD sound for Tudor has… greater depth and transparency… Those who have been following Nott’s often-impressive Mahler cycle on Tudor need not hesitate… [the release] confirm[s] the stature of Nott among the leading Mahlerians of his generation in presenting what its composer knew was his ‘ninth symphony’ in all save designation and which remains arguably his most audacious conception.