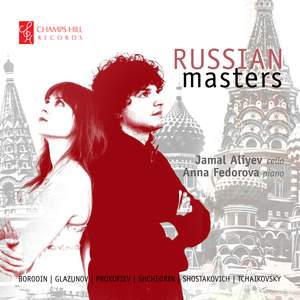 There’s a heartfelt quality to Jamal Aliyev’s playing that comes across strongly on this debut disc. — BBC Music Magazine, May 2017, 3 out of 5 stars More…

Cellist Jamal Aliyev and pianist Anna Fedorova explore the Russian works that are been central to both their musical and family heritages.

In the introduction to this new recording Aliyev and Fedorova describe the shared experience of being brought up by parents who were musically schooled in Russia’s Soviet music tradition, lending a special resonance and insight to their performances and collaboration. This disc includes Sonatas and other works by a broad palette of different Russian styles, including Prokofiev, Shostakovich, Tchaikovsky, Glazunov, Borodin and Schedrin.

Anna Fedorova is one of the world’s leading young pianists. From an early age, she demonstrated an innate musical maturity and outstanding technical abilities. Her international concert career took off while she was only a child, and audiences around the world were stunned by the depth and power of her musical expression. Critics have praised Anna’s signature “sweet modesty and wild expression”, which rendered listeners “completely taken by surprise, compelled and astonished.”

There’s a heartfelt quality to Jamal Aliyev’s playing that comes across strongly on this debut disc.

Aliyev plays with a pleasant if tightly focused tone and Fedorova is clearly on the same wavelength. There are countless little touches of imaginative colour – the balletic grace with which Aliyev unfolds the second subject of Prokofiev’s first movement, Fedorova strumming her piano like a gusli at the start of Glazunov’s Chant du ménéstrel, and the two of them whirling and shimmering together in Shostakovich’s Scherzo

Thoughtful, expansive readings of the two great Soviet cello sonatas from a young artist possessed of enviable technique and a rich broad palette.