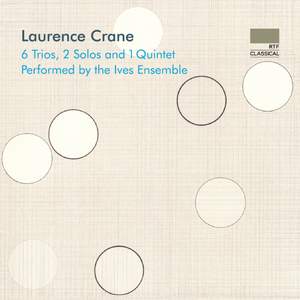 Contrary to their apparently whimsical simplicity, the nine chamber works on this engaging release are highly structured – and entirely abstract, regardless of personal-sounding titles…the music... — BBC Music Magazine, April 2017, 4 out of 5 stars More…

Crane: Trio for Ros and Peter

"This collection of nine works of mine, recorded by the Ives Ensemble, spans exactly 30 years but all the music was actually written at the opposite ends of this period of time. The six trios are early pieces, composed in 1986 and 1989, while Piano Quintet and the two works for solo piano were written between 2011 and 2016. A 10th piece was also recorded and is available only on download, this is Holt Quartet, composed in 2013. If these compositions were listened to in chronological order, Hugo Pine (1989) would be followed by Piano Quintet (2011). These two works are both entirely characteristic of my compositional endeavour at those particular points in time. They are in some ways similar and in some ways different. What has changed in the intervening 22 years?" Laurence Crane

Contrary to their apparently whimsical simplicity, the nine chamber works on this engaging release are highly structured – and entirely abstract, regardless of personal-sounding titles…the music remains subtly nuanced but decidedly un-fragile. It’s surprisingly tricky to play, but the Ives Ensemble prove persuasive. Albeit heavy on reverberation, the recording serves them – and Crane’s gently self-deprecating humour – well.

The fascination of the notes, and their allied associations, locks your ears into each moment. Ripe climaxes and conventional resolutions appear without preparation. Familiar chords are gently coerced into fleeting cohabitations with unrelated common triads – the very familiarity of this material playing games with tonal memory as chords are placed in unlikely juxtapositions

Laurence Crane’s music does so much with so little. The gestures are frank and ambiguous, bemused and sincere, self-deprecating and alert, unadorned and unpretentious...It is all performed with a clean graciousness that sounds way easier than it is.