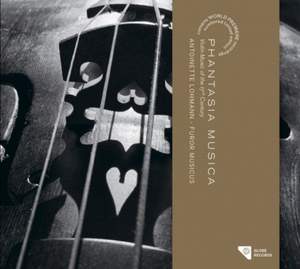 Violin Music of the 17th Century

Seventeenth-century music is rhetorical music: everything notated by the composer conceals an intrinsic emotion. However the task of expressing these emotions rests solely with the performer, who must convey them in such a compelling way that the audience is captivated and moved. Thus, when performing rhetorical music the musician should play in the same way that one adapts his manner of speaking to the emotion of the moment, for instance by taking more time, speaking more calmly or agitatedly, louder or softer.

The style of the works recorded on this album is often associated with Stylus Phantasticus, a term originally applied to a compositional method in which the composer's fantasy was the source of a composition. Later the term’s emphasis shifted to the freedom of performance. Phantasia Musica was another term signifying the importance of performer’s imagination, however the word ‘phantasia’ here refers to improvisation; many 17th-century compositions (e.g. toccata, fantasia and capriccio) are actually written-out improvisations.

Antoinette Lohmann recorded these works on a late 17th-century violin by Egidius Snoeck (Brussels), which is still in its original state and strung with four pure gut strings. The bow is a copy of a short, convex, 17th-century German bow, which is held with the thumb under the frog or on the hair; this was the most commonly used bow hold throughout Europe until the end of the 17th Century.