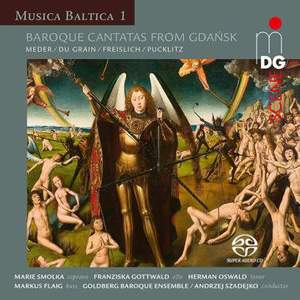 Pucklitz: Ich will in allen Sachen

When Danzig, today’s Gdansk in Poland, was an independent and prosperous centre of trade and commerce, it also enjoyed the status of a magnificent and multifaceted music centre.

However, many of the sources documenting its rich cultural heritage are no longer extant, most of them destroyed by war. Andrzej Szadejko has researched the historic holdings of the Library of the Danzig Academy of the Sciences and made surprising discoveries.

On this WORLD PREMIERE recording he leads the Goldberg Baroque Ensemble in performances of seven Baroque cantatas in every way equaling the originality and mastery of works by much more famous composers of those times.

The Goldberg Baroque Ensemble takes its name from Johann Gottlieb Goldberg, certainly Danzig’s most famous musical son and the Bach pupil whose name was immortalized by is teacher’s famous variations.

At the annual Goldberg Festival the ensemble performs in Gdansk’s Trinity Church, a structure with opulent acoustics optimally rendered on this multidimensional high-resolution SACD recording.

Meder’s Singet, lobsinget evokes a festive atmosphere most economically, and the more extensive selections from Freislich and Pucklitz show a decent stylistic range and agreeable invention… The performances emphasise these qualities; ‘workmanlike’ may sound like damning with faint praise but I mean it here entirely positively.